Could someone explain to me the fourth choice. Why is it not convex?
Thanks in advance

I am also a bit confused about the 'overfit' and the second SGD. In my opinion :

And to answer to your question I think that it's simply because the function is not continuous over \(R^{2\times 2}\).. Not sure though 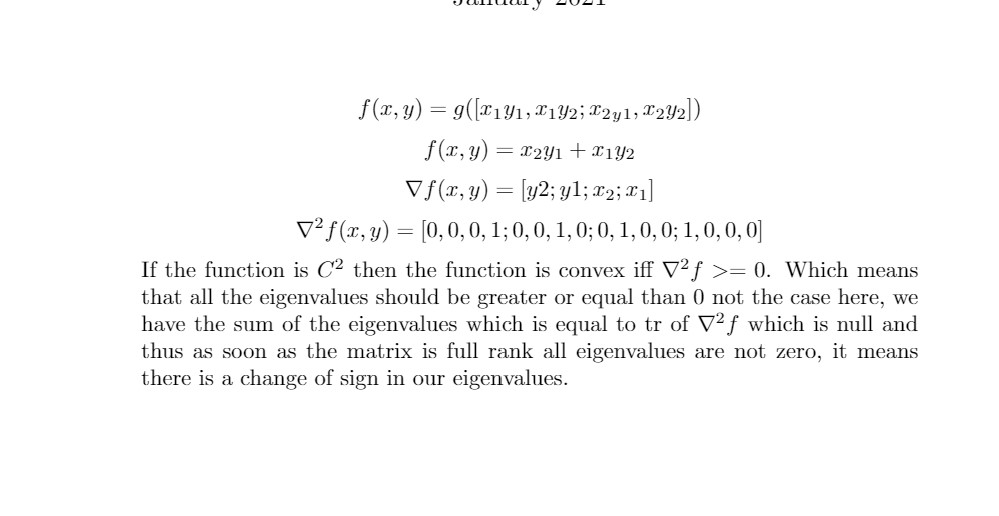 Tell me if not clear

You are right, and I would just add that loss function L has to be an average since otherwise SGD and GD won't give the same results in expectation.

I don't find it clear how you know that you have negative eigenvalues by looking at this matrix.
Could you please share more details :)
As in the link with trace etc

Hello, I also don't see why the eigenvalues are negative. Any help will be useful.
Thanks

A 2x2 matrix is positive definite if and only if the diagonal terms are positive and the determinant is positive.

From Wikipedia:
The Hessian matrix of a convex function is positive semi-definite.
The second-derivative test for functions of one and two variables is simple. In one variable, the Hessian contains just one second derivative; if it is positive, then x is a local minimum, and if it is negative, then x is a local maximum; if it is zero, then the test is inconclusive. In two variables, the determinant can be used, because the determinant is the product of the eigenvalues. If it is positive, then the eigenvalues are both positive, or both negative. If it is negative, then the two eigenvalues have different signs. If it is zero, then the second-derivative test is inconclusive.